My Soirée Salon and Spa Experience

I wasn't really supposed to write again, but after this afternoon's wonderful experience, I figured that I just had to.

Beauty complements fashion. Having a really great haircut or hairstyle or makeup accentuates the clothes, shoes and accessories that you're already wearing. And so I thought of also covering beauty stories in this blog, starting with today's entry.

Earlier this afternoon, I went to the salon my brother frequents for his haircuts, to get my own haircut. Like him, I wanted to have my own Korean-inspired haircut with sleek layers so I went there. 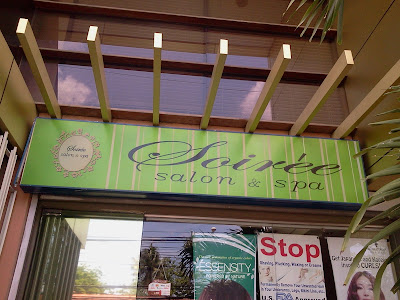 The name of the salon is Soirée Salon and Spa. It's located at Katipunan Avenue, beside BPI and Ching Santos. It's small and a bit easy to miss so you have to look closely for its green store sign to find it.

I brought an issue of W Korea from last year to show the stylist a couple of photos of the cut I wanted. He showed me how it would look on me, and then I requested for him to make it shorter than the one in the magazine. Shortly after cutting my hair, he asked me if he was getting it right, and I said yes. He proceeded on until my haircut was done. He worked very quickly too and finished just in time for me to attend an afternoon gathering.

I was surprised to see my peg and new hairstyle look really similar, even with my prescribed length. It was the first time my hair was handled by a male hairstylist and he had gotten what I wanted right, through consultations with me and minimal fuss. I didn't get to take a lot of photos nor get to ask more information about the salon since I didn't plan on covering my experience, but I really enjoyed my first time there. I will definitely go back and avail more of their beauty and relaxation services! 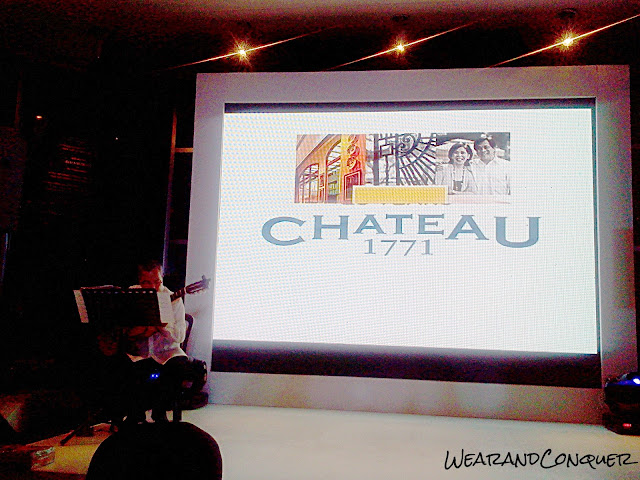 Chateau 1771 Group of Restaurants celebrated their 25th Anniversary with a book launch at the Ayala Museum last Saturday, May 18, 2013. Present during the event were owner Ricky Gutierrez and their reknowned and well-loved chef, Vicky Rose Pacheco. 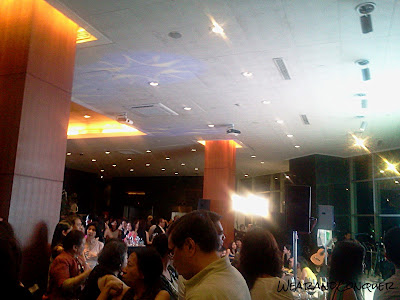 I arrived late so I wasn't able to catch the program, but I'm thankful as I was able to taste the sumptuous food and meet the owners. I tried to stay away from the meat, but I knew I was kidding myself. I gave in. 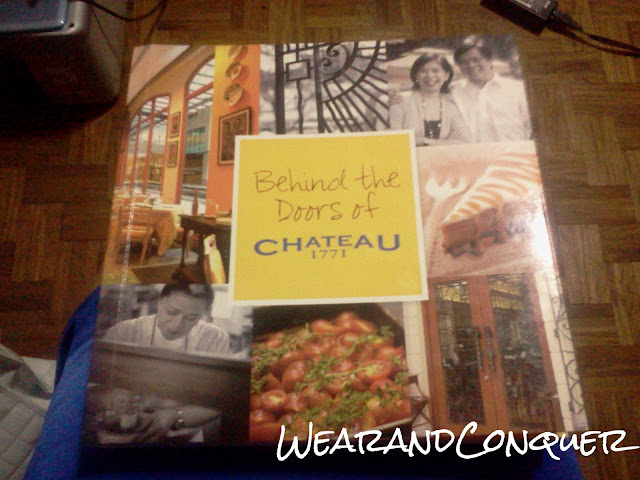 The book (which I read as soon as I got home), contained stories about the restaurants, endeared me as I have special memories tied to each 1771 restaurant experience (you can read them in my faith-based gratitude blog). My favorite was Portico 1771, sadly it was the one that closed shop. It's great though that all the other restaurants - Chateau, Sentro, Cafe 1771, WineBar and Sidebar are still up and running. If you haven't gone to any of those, I recommend you do! Thank you Chateau 1771 Group of Restaurants for inviting me, and for continuously serving us great food and taking care of us through your excellent service! More power and blessings to you! 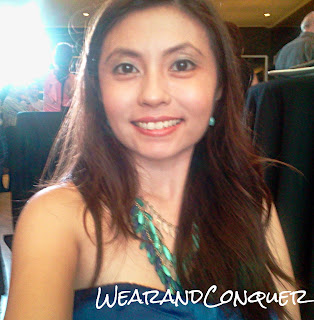 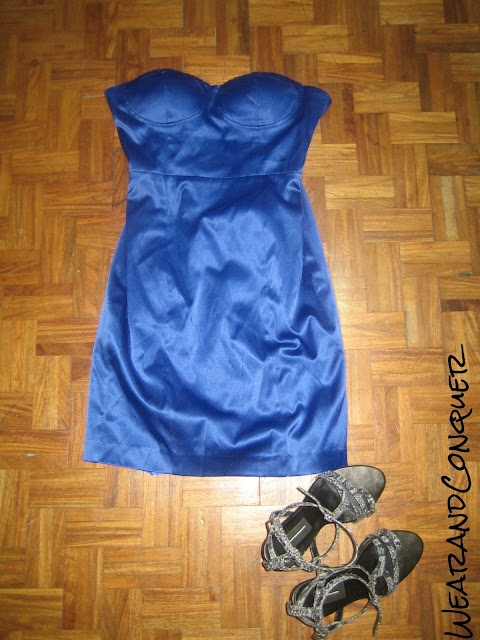 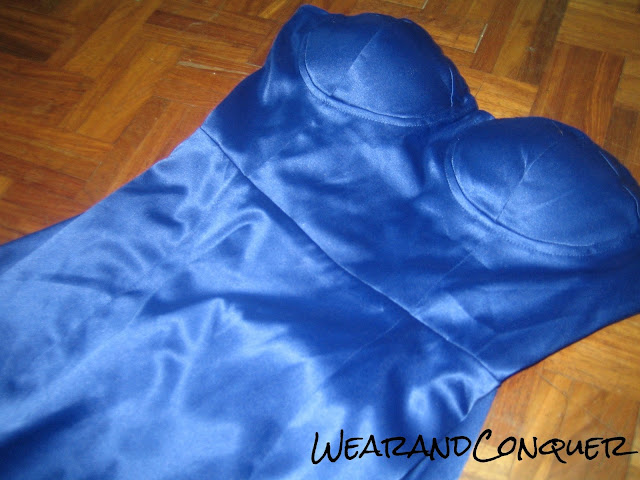 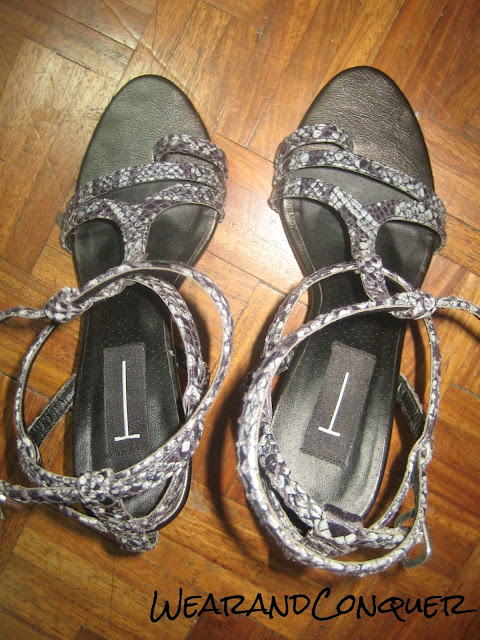 For the event, I wore an electric blue bustier dress by Forever 21, shoes by T. My bag, necklace and earrings were from Liz Claiborne, Claire's and my mother, respectively.
Posted by ADC at 4:37 PM No comments:

Vote for Meg's next Style Ambassador

Can you all do me a favor and vote for my friend, Gail Hipolito-Sarion? I remember her as the stylish, fun lady from her batch during my healthcare work years so it's no surprise that she's part of I Am Meg's fourteen finalists. 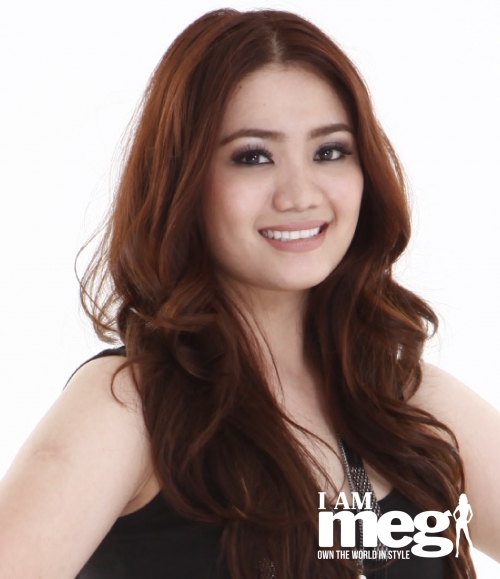 After our short stint in healthcare, I moved to advocacy work while she moved on to be a happy housewife-slash-freelance stylist. Many years after, she shares her time and talent to all of us through I Am Meg's search for style ambassador. 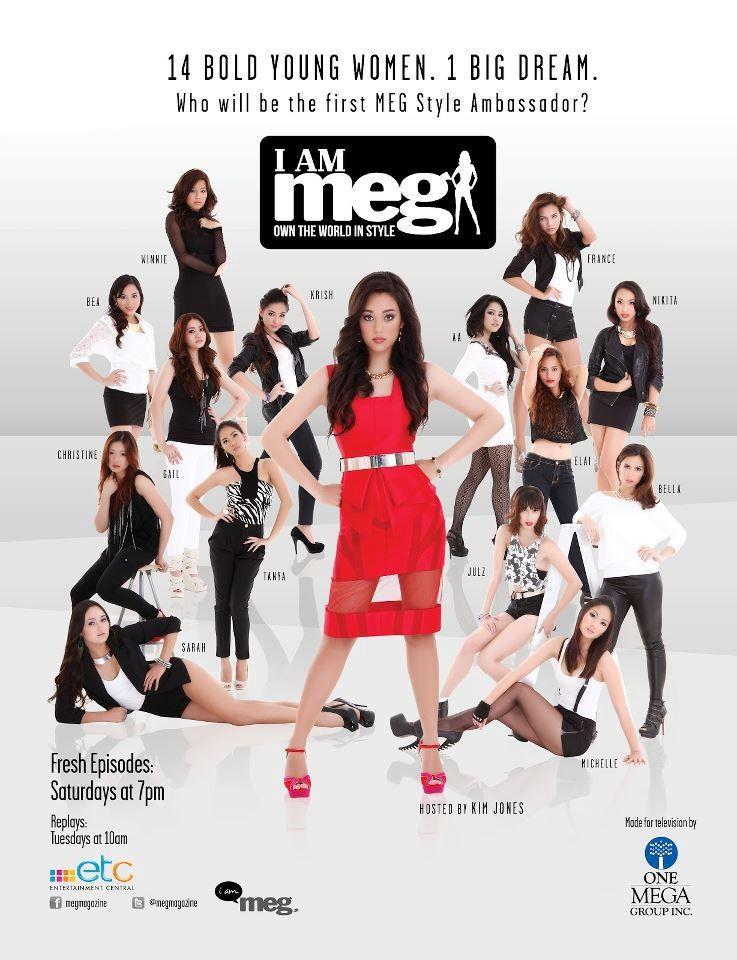 You can vote for her here!
Posted by ADC at 8:58 PM No comments:

Email ThisBlogThis!Share to TwitterShare to FacebookShare to Pinterest
Labels: Gail Hipolito-Sarion, I Am Meg, Style Ambassador

Thanks to PSY and his hit song "Gangnam Style", the dynamic South Korean modern culture is finally getting the attention it deserves. Though South Korean pop acts such as Dong Ban Shin Ki, Super Junior and Shinhwa and drama series have captured the hearts and minds of many people worldwide, none of the efforts have caught the public's eye as much as the song and the music video (Sorry Wonderfuls, "Nobody" didn't make it THIS BIG in such a short span of time).

The music video has spawned "parodies", with some of them depicting subcultures in other South Korean cities, such as Hongdae and Busan. Gangnam and Hongdae are both districts in Seoul, with the former known as the "Beverly Hills" of South Korea, and the latter known because of its youthful culture, thanks to the universities around it. Busan is an urban coastal area, known for its beaches and ports and equally colorful metropolitan culture.


So if you want to dip into South Korean culture and get good laughs, I suggest you check out these three videos. 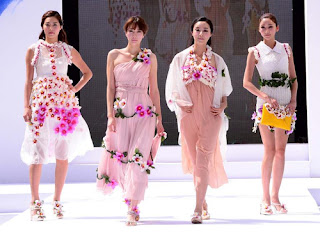 Mugunghwa is also known as the American "Rose of Sharon". Koreans have expressed their love for the flower for thousands of years, with a band of warriors (the Hwarangs) inspired by, and a day dedicated to the flower. While South Koreans still openly show their fondness for mugunghwa, North Koreans show their fondness more now for kimjongilia and their national flower, the magnolia. 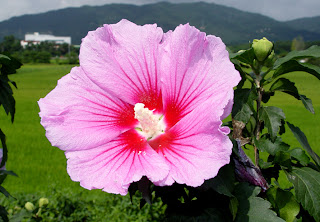 Here are more photos from the said fashion show, courtesy of Newsis. 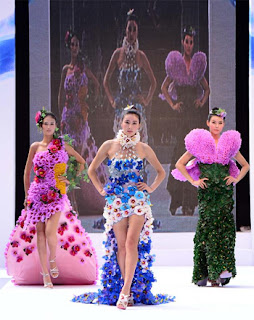 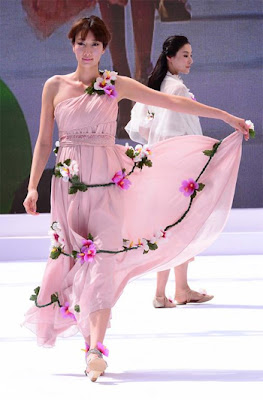 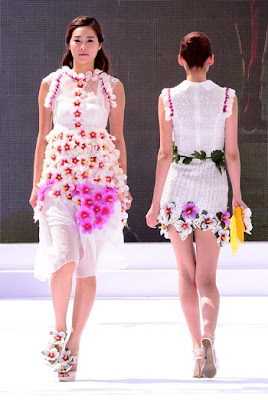 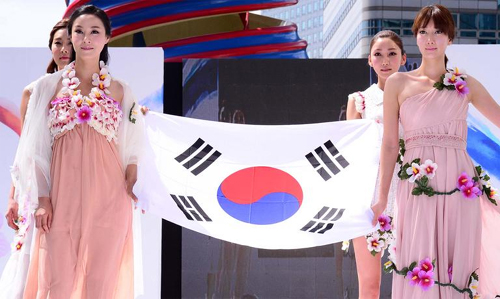 The 2012 Jewelry Fair Korea will be held from 19 - 22 April at Hall C of Coex in Seoul. The first two days will be for trade buyers only. The fair will open to the public on the last two days. Aspiring buyers can register on the event website.

Fine jewelry, diamonds, pearls, and gemstones, watches & clocks, fashion jewelry & accessories are just some of the items that will be on exhibit. Tools & equipment and jewelry publications will also going to be on exhibit.

Even mom-and-baby fashion has been influenced by the Korean wave. The Chosun Ilbo reports that traditional Korean baby carriers are becoming a hit in the United States. It's called podaegi (포대기), which literally translates to "wrap". The report is as follows:

The traditional Korean baby carrier blankets called podaegi are a hit among young hipster parents in the U.S. and elsewhere. Podaegi, which is basically a large piece of cloth with two straps, has become a popular item on online shopping sites. A U.S. online shopping site for young parents called togetherbe features photos of the Korean-style baby carrier and instructions on how to use it.

A Google search for podaegi shows mothers around the world using it to carry their baby.
The website introduces it as a traditional Korean form of carrying babies close to a parent's body. It adds that podaegi "can be tied around the adult and baby" with the straps attached and "it's a perfect fit with every tie, resulting in superior carrying comfort for both mom and baby!"

Podaegi are also being sold on other websites including Cotton Cradles trading baby carriers of natural fabric. A search for podaegi on Google and other international portal sites leads to content uploaded by people who created their own podaegi along with photos or video clips of mothers carrying their babies in one.

The Chosun Ilbo recently reported an upturn in men's cosmetics. As more and more Korean men realize the importance of good grooming and skincare as part of their health, South Korea's cosmetic industry rises to premiere status in Asia. Here's the full report:


High-end foreign cosmetics brand SK-II recently introduced a skincare line for men in Korea, its first such foray in any country. The decision came after liquid essence for men, which hit local stores last October and costs W160,000 (US$1=1,120) a bottle, saw a month's worth of inventory sell out in just four days.

"Korea accounts for 40 percent of the world's high-end cosmetics market for men, and Korean men are often considered in the industry as test beds for new products," a sales associate of SK-II said.

Men are quickly forming the main ranks of cosmetics shoppers, with the domestic market for men's beauty products growing 15 percent each year. Industry watchers expect the market will surpass W1 trillion this year.

In Korea, concealers, products that minimize pores and whitening products have seen higher sales growth than basic skincare products such as lotions or skin conditioners among men. Meanwhile, domestic cosmetics brand Amore Pacific opened a make-up store for men in the trendy Hongik University area in northern Seoul and it attracts 300 customers a day on average.

The same holds true for apparel. Sales of women's clothing at Lotte Department Store nationwide fell 5 percent in January compared to a year earlier, but increased 7 percent over the same period for men's clothing. Shinsegae Department Store became the first retailer in the industry to open a section last year specializing only in men's fashion and sales have already risen 450 percent since it opened.

Domestic retailers say Korean men in their 20s and 30s have grown up watching popular men's dance groups since the late 1990s and are used to spending money on personal grooming. For example, many online shopping sites saw a surge in sales of men's undergarments that make the wearer look more muscular. Sales of body shaping or padded underwear rose 170 percent in February from one year earlier, according to popular online shopping mall 11st. 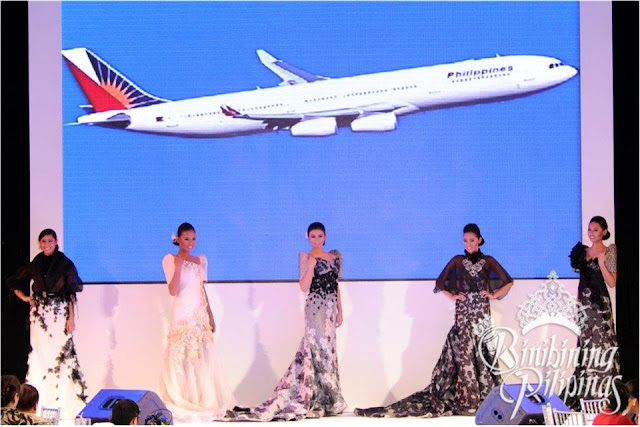 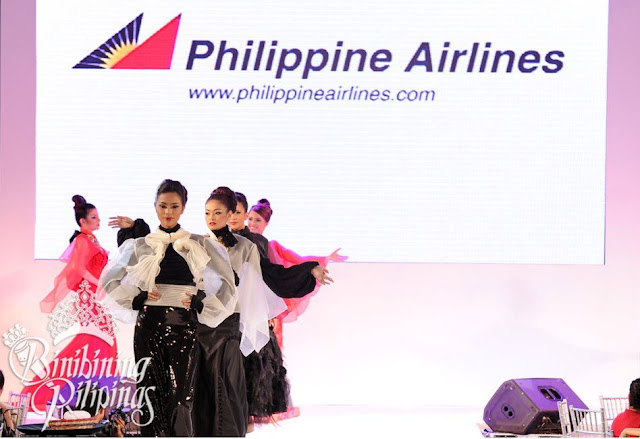 Photo Source: Bb. Pilipinas Facebook Page
Posted by ADC at 9:55 AM No comments: 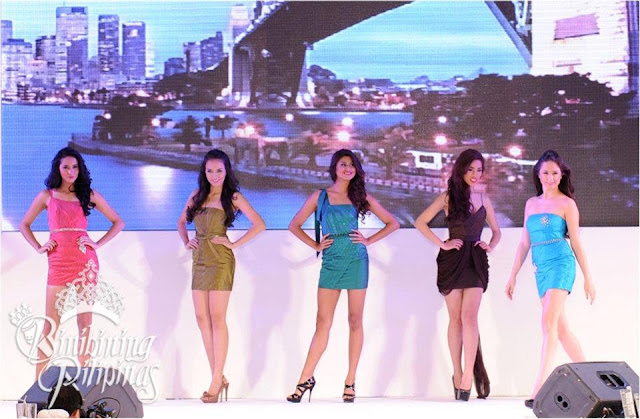 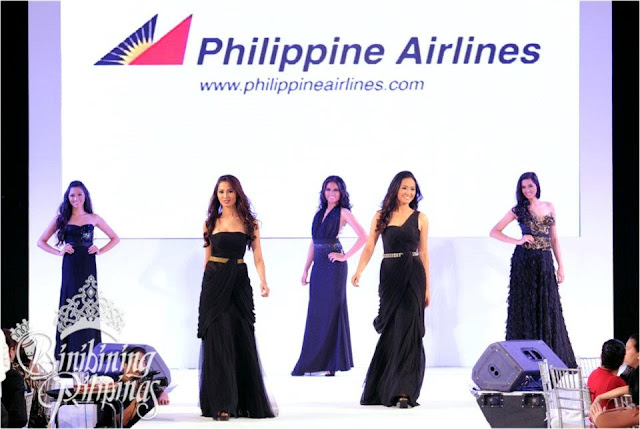 Photo Source: Bb. Pilipinas Facebook
Posted by ADC at 9:21 AM No comments: