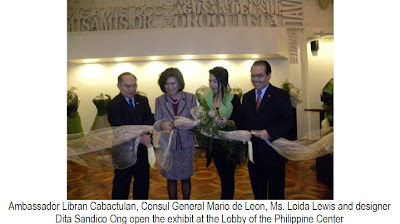 With the support of the Philippine Consulate General, renowned Philippine designer Dita Sandico-Ong’s works were featured in a fashion show and exhibit launched last 15 March 2011, held at the Kalayaan Hall, Philippine Center in New York. The exhibit was open for public viewing from 15 March to 8 April. Entitled “With a Touch of Green”, the collection featured Filipiniana-inspired designs made from abaca or banana fiber, including dresses, wraps and tops. According to the Consul’s office, the collection reflected Dita Sandico Ong’s missions of promoting Philippine-produced materials, “cultural awareness and sustainable, ecologically-aware design” as well as women empowerment. 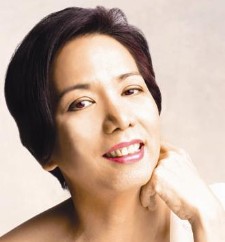 Dita Sandico-Ong has been in the local fashion business for twenty-five years and is a staunch supporter of locally-produced materials. She graduated from the University of the Philippines in Diliman, Metro Manila with a Fine Arts Degree in 1982 and the Tobe-Coburn School in New York with a Degree in Fashion Design in 1984. Dita was the merchandising manager for local department store C.O.D. before she built her own clothing company called Cache Apparels. At present she is the president and designer of Cache Apparels and is also a fiber consultant for the Center of International Trade Missions (CITEM).
Dita also works closely with indigenous peoples' (IP) communities, particularly with the fishing communities of Baras, Catanduanes. Her creations are born out of sustainable livelihood projects in that area. Dita says “Banana fiber from the Philippines is the best fiber in the world," adding “it is the strongest in the world as well. With this abaca – inspired fashion, we are getting back to basics in promoting environmental awareness, and we are further raising the bar in terms of high-end fashion which will encourage other countries to have a more acute appreciation for Philippine culture.” Apart from abaca, she has also used other materials such as piña-lino, abel-iloco, banana linen, and banana rayon in her collections. Dita is widely-known as an ‘ethical fashion designer’ and through the years has earned respect among designers, fashion lovers and environmentalists in the Philippines. Her advocacy goes beyond fashion as she is also the President of Earthaven, “a foundation that caters to alternative living”. Earthaven is a 27-hectare eco-village located in San Mateo, Rizal dedicated to the preservation of traditional values and the protection of the environment.
The sustainable development campaign began in the very early nineties, yet Dita Sandico-Ong began working with and for the environment in the mid-eighties through fashion. Let she be an inspiration to everyone who wishes to adopt an eco-friendly, IP-community loving lifestyle. If she can do it, then so can we!


Dita Sandico-Ong will be opening shop soon in the US, so please do watch out for that and support her and her advocacies.
More power Ma’am Dita!
Sources: Philippine-Design, The FilAm
Photos: Philippine Deparment of Foreign Affairs Website
Posted by ADC at 9:30 PM