There is another Filipino designer who is currently making it big beyond our lush shores and he is none other than Robin Tomas, a New York-based fashion designer and only child of Philippine media personality Tessie Tomas.
Thirty-three year old Robin graduated from the University of the Philippines – Diliman with a degree in advertising. He worked for the local advertising industry for two years before entering Parsons School of Design in New York in 2000. While in Parsons, Robin apprenticed with Valentino and later on with Anna Sui. Robin not only trained with the best, but was also the best in his class as he graduated with top honors. After graduation, he worked and designed menswear for American brands Gap International and Tommy Hilfiger’s European and Japanese markets. He also designed menswear and children’s clothing for J. Crew. In 2009, Robin launched his first collection in the Philippines which notably reflected his love for elegance and was well received by local fashion lovers.
In October of the same year, Robin joined Supima’s men’s basic t-shirt design reinvention competition. Supima stands for “Superior Pima” and is a non-profit organization for American Pima growers from Arizona, California, New Mexico and Texas. Superior Pima is a type of luxury cotton made of superior fiber and is silky to the touch. In January of 2010, Robin won the Supima Award for the Best Reinvention of the Tee. His design was launched on 19 March 2011 at Bloomingdale’s in New York.  At $88, the price seems pretty steep, but considering that it is made by a Filipino and that it is made of Supima, then it is all worth it. Hopefully he gets to come back soon and launch his line locally for Filipino men to wear. 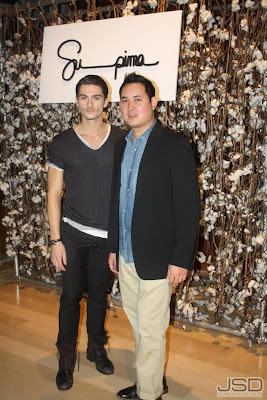 Robin Tomas is also ready to launch his Fall collection, which you could initially view on his official website. Robin’s success in the fashion world goes to show that the Filipino values of humility, hard work and determination go long way. It’s really admirable to see that he did not bank on his mom’s popularity but rather relied on his own talent to get to where he is now (In hindsight, his mom Tessie better known as "Teysi", was truly a great mother figure, not just in media but in real life as she raised her son very well).
To Robin, congratulations and may more opportunities come your way!
Robin Tomas
Official Website
Sources: Supima, Philippine Star Online, Philippine Daily Inquirer Online, SPOT
Photos: John Simon Daily and Brandie Tan