K-Pop is a new category featuring your favorite idols and their clothing styles (or should I say, the coordi noonas' style?). First up, we have this report from BNT: 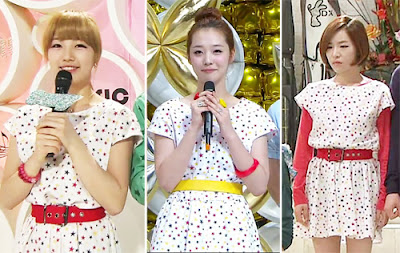 Suzy vs. Sulli vs. Ga In: Wearing the Same Clothes

Miss A’s Suzy (수지), f(x)’s Sulli (설리) and Brown Eyed Girls’ Ga-In (가인) seen wearing the same item has been a hot topic among netizens. In MBC’s Show Music Core and SBS’ Inkigayo wherein Suzy and Sulli are MCs respectively, the ladies were seen wearing the same white boatneck cap-sleeved minidress with a unique red and yellow pattern and a belt (Suzy’s was red, Sulli’s was yellow). As always, Suzy and Sulli caught viewers’ eyes with their clothes and cute charms. In MBC’s sitcom “All My Love”, Ga-In’s dress was worn over a red long-sleeved top and cinched with a red belt, and looked more sleek.
(other irrelevant parts were not translated)
Source and Photo: BNT News
Paraphrased Translation: Aisa de la Cruz
Posted by ADC at 2:30 PM