Here are some photos of PFW Holiday 2011's Menswear show featuring 12 of the country's top designers last 10 May 2011 held at the SMX Convention Center. As I was not able to attend the week itself, I thought of featuring my favorite designs from each collection instead. Photos were taken from other notable fashion websites and blogs. Most descriptions are based on this Manila Bulletin article.
Nico Agustin and Jesson Capuchino (stylebible.ph)
Agustin and Capuchino's works are partly Asian-inspired. Nico Agustin's collection, "Metal Hare" was based on this year's Chinese Zodiac sign, the Metal Rabbit and translated the rabbit's meek characters into light colors for clothes that are fit for a college setting. Capuchino's work on the other hand, combines the styles of conservative British aristocracy with the boldness of Shibuya fashion in Japan. Capuchino's collection is aptly called "Shibuya Crossing". Ordinary and fashionable men would find the pieces wearable. 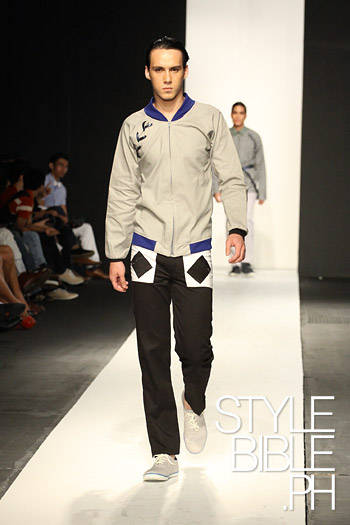 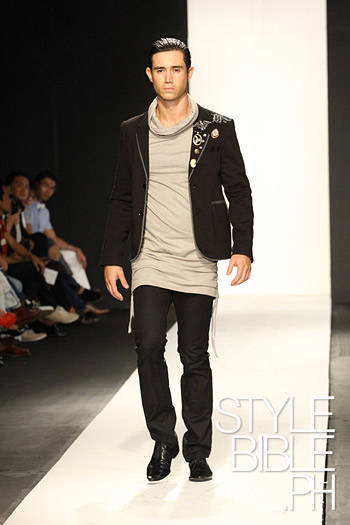 Dodjie Batu (Kryz Uy/thirstythought)
Majority of Batu's collection was in black and grey and added unusual elements to men's clothing, such as knit details seen on the suit featured below. Other details included cut-outs on either side of the upper breastplate, woven bags, suspenders and caps. It was a very interesting collection, I must say - something that I'd want my (hopefully fashionably adventurous) future husband to have a piece of, someday! 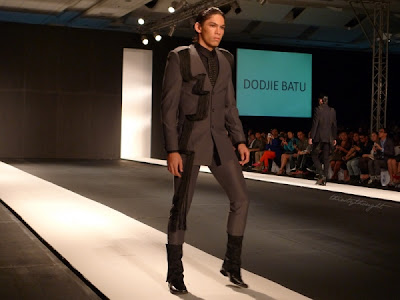 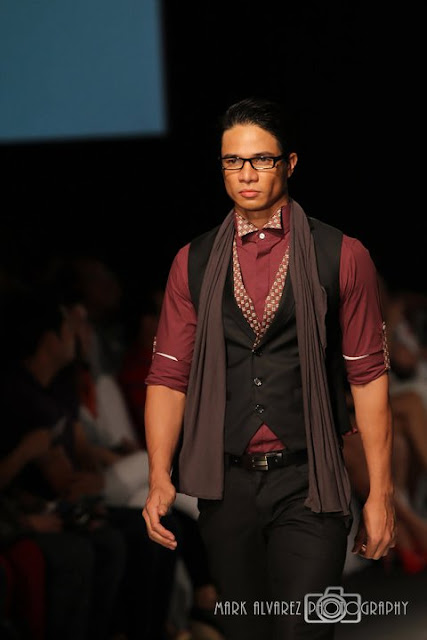 Jingo Inoncillo (feedmink)
Inoncillo's collection, "Fire, Coal and Ashes" used various methods on fabric such as pleating, smocking and subtle draping to give menswear fashion a more contemporary feel. The collection was inspired by "the concept of heat and its aftermath". It's not something that Filipino men would usually wear, but honestly, I could see a K-Pop star in the piece below (either Kim Hee Chul or G-Dragon). 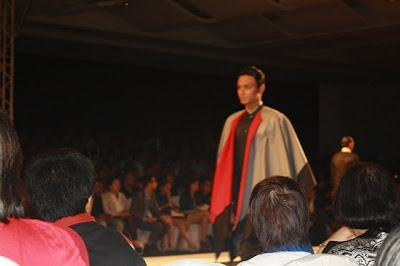 Ulysses King (gucci-and-me)
For his "Contempo 70s" collection, Ulysses King rewinds the clock and takes us back to the disco decade armed with jackets that have tassels, metal buttons, bowties and metal zippers paired with orange or blue loafers. His collection was a winner! Again, it's a collection that you might find fitting for K-pop groups like Big Bang or Infinite. 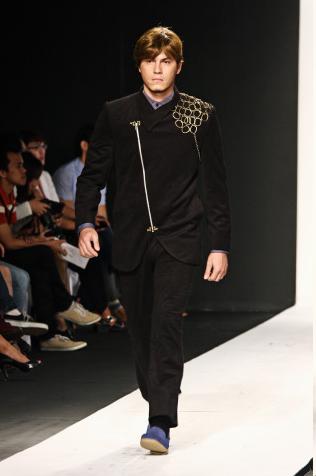 Anthony Nocom (Status Magazine Online)
White was the main color of Nocom's collection, which was composed mainly of menswear classics such as jackets, vests, tops, pants and shorts. Nocom says that his collection reflects "sleek, relaxed elegance." His collection is something that fashionably adventurous men would probably be purchasing pieces from. I like! 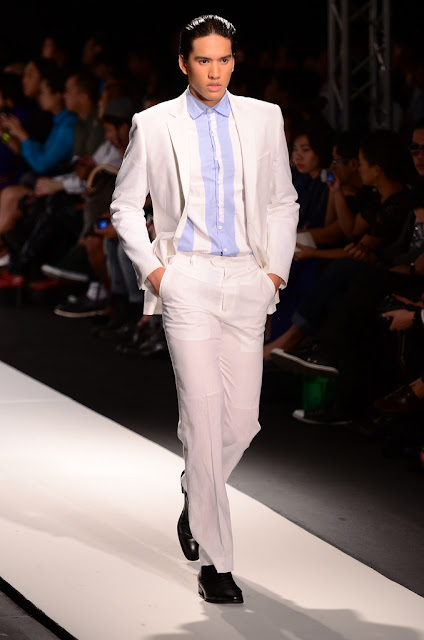 Bang Pineda (Mark Perez Photography)
Bang Pineda's collection was one of the most widely covered as it was featured on many fashion blogs. Using the colors black, white and grey, metallic hoops and photographic prints, his collection was one that was not to be missed. Pineda's collection treated fashion as art and that's what made it stand out and a crowd favorite. Unfortunately, it's a little too adventurous for ordinary men so I don't think you'd see someone sporting a Pineda vest or pair of trousers soon. 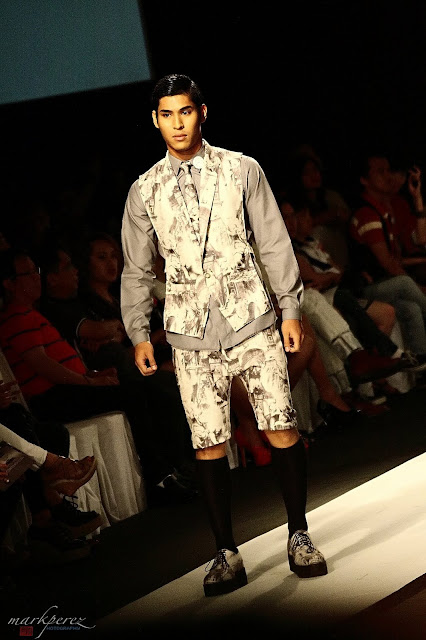 Odelon Simpao (Jonver David)
"Black Hole" by Odelon Simpao used fabrics such as cotton tulle, denim and Suisse cotton to create a 'dark and edgy' collection fit for the 'fashion-forward' professional. It's very fitting for those who are working but still want to stand out from the yuppie crowd. 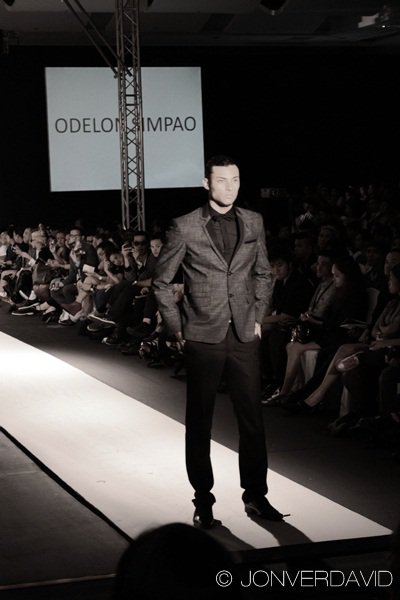 Drei Soriano (lbosquejo)
Drei Simpao's "Japanese-inspired" collection was simply breathtaking to look at. It was part pop star, part wily movie villain. Needless to say, it was one of my fave collections. I wasn't there, but it was still a treat for me to look at. 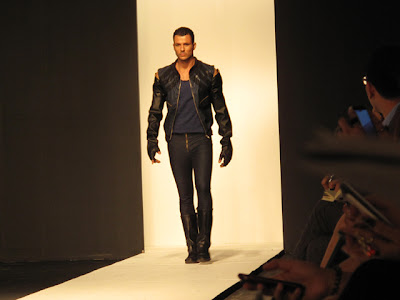 ZXander Tan (Paul Cortes/littlejoco)
Tan's collection is lovingly dedicated to all the "hardworking men everywhere". True enough, his collection's pieces of loose shirts, hoodies (such as the one below), jackets, hoodies and jumpers that "ensure ease of movement". To "the Eskimos and the Chinese fishermen, to the Tobi construction workers of Japan and Korean farmers" and also our dear fishermen and farmers back in our provinces, ZXander Tan dedicates his collection to you. Thus, the collection is for every man out there! 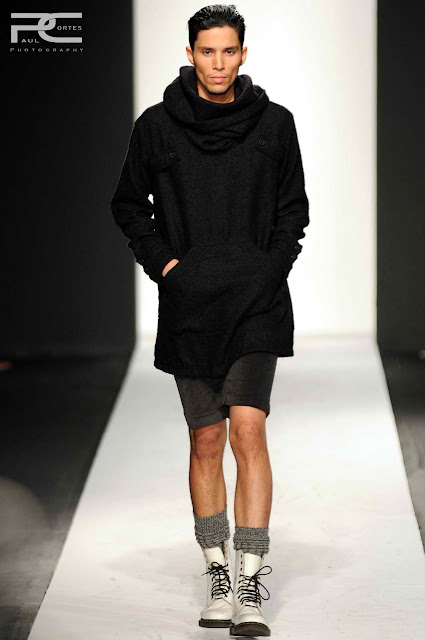 Frederick Policarpio (Gabby Cantero and Cholo de Vega for A Different Cut)
Policarpio's collection reminded me of Guinto's work, only it was more modern and fierce with the glasses, bonnets, checkered suits and high-collared jackets. The collection's something quite wearable for ordinary men, especially those who reside in cooler places in or out of the Philippines. 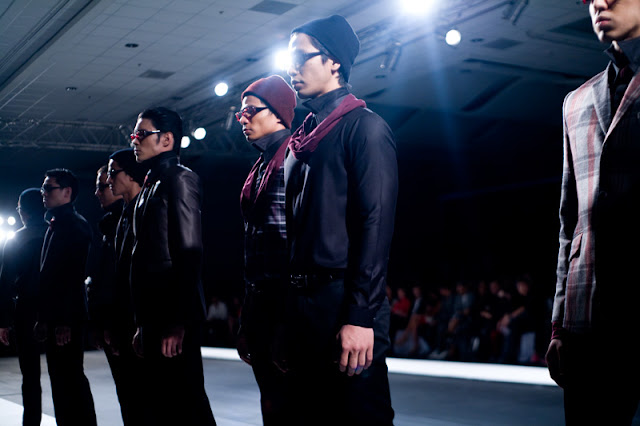