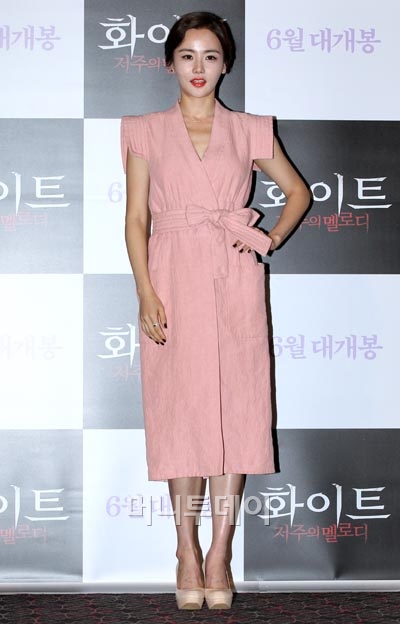 Actress Hwang Woo Seul Hye's dress (황우슬혜) worn during the premiere of her film, "White - The Cursed Melody" (화이트:저주의 멜로디) has garnered attention as it has been criticized as "humiliating bathroom style fashion". Hwang Woo Seul Ye wore a pink wrap dress with a thick ribbon that closely resembled a bathrobe. She explained her style choice in an episode of MBC FM4U's show, "Blue Night, This is Jeong Yeop" (푸른 밤 정엽입니다), by defending Kodi, the dress' designer - "We want to challenge fashion and revert back to those times when artistes could choose their clothes", reflecting the importance and nobility of fashion.
"White - The Cursed Melody" will be in theaters, 9 June 2011.

Personally, I like what she wore! It does look like a bathrobe, but it's still cute. Thumbs up for Woo Seul Hye's style bravery!
Posted by ADC at 6:39 PM